I was lucky enough to be invited to taste the award winning wines from White Castle vineyard, along with Nigel Barden the BBC food and drink expert, famed for his part in Simon Mayo’s drivetime show.  http://www.bbc.co.uk/programmes/profiles/2KPwHVH56sDh9gd4TzT2qVt/nigel-barden

White Castle Vineyard is a small Welsh vineyard situated near the market towns of Abergavenny and Monmouth it is owned and run by Robb and Nicola Merchant.

Having purchased the 12 acre small holding in 1995 they converted the milking parlour into their home a year later, however it was 2008 before the dream of owning a vineyard become a reality, the 5 acre gently sloping, south facing field was purchased, soil tests were performed and vines ordered.

May 2009 saw the planting of 4000 vines, the varieties of vines planted were Pinot Noir, Regent, Rondo, Seyval Blanc & Phoenix, now there was no turning back, May 2010 saw a further planting of 800 vines this variety being Siegerrebe. 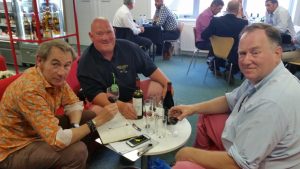